Our Beaumaris Modern committee is made up of skilled and enthusiastic local volunteers.

We meet regularly and we have established the following sub-committees, which can also comprise non-committee members:

If you are interested in joining our committee, or volunteering for one of our sub-committees, please email us at hello@beaumarismodern.com.au 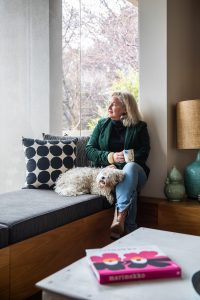 I grew up on the Mornington Peninsula, so was drawn to Beaumaris because the familiarity of a bayside community made me feel ‘at home’.  It wasn’t until I was living here that the significance of the suburb’s architecture became apparent.

Art, design and architecture have been interests of mine since childhood.  I followed this interest in creative pursuits to become an Art teacher which spring-boarded me into a career in education.

Whilst leading a workshop for the International Baccalaureate, one of the participants started chatting to me about my jewellery. We had an instant connection and she invited me to a Beaumaris Modern event.  I resonated with the mission statement and later joined committee.

Meeting this group of likeminded creative people has been a wonderful benefit of joining committee.  We’ve enjoyed many events, open house tours, talks, bowls nights and our fabulous trip to Palm Springs.  I look forward to a continued connection with the local community. 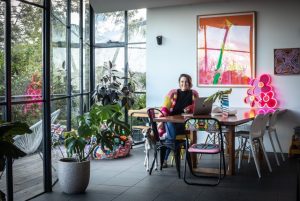 As a visual artist, specialising in design and photography, and passionate about mid-century architecture, I moved to Beaumaris in 2014 with my husband, daughter and fur babe. We discovered our wonderful Bayside beach house, built in the late 1950s, and renovated in the 90’s by renowned architect Peter Carmichael. I fell in love with the suburb for its colourful history within the arts world, its connection & location to the bay, the beautiful trees and wonderful cliffy beach tracks.

I volunteered to be Beaumaris Modern’s official photographer to be involved with a group of like-minded creatives; and to combine my appreciation and love for mid-century architecture & interiors with the people who live in them. I love delving into the history of this place on the bay we call home. And playing my part in celebrating and recording that history for years to come. 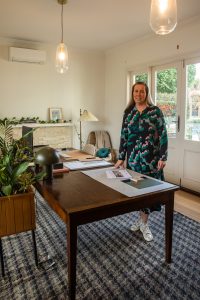 My connection to Beaumaris began some 16 years ago, when we purchased our first home here. Coming from the country, we were drawn to the neighbourhood character, and love being surrounded by nature and unique mid-century homes.

I love homes that tell a story and I’m lucky to now be the custodian of 'Pointside' - one of the oldest homes in Beaumaris, built in 1890. A different era, but a home that compliments mid-century design beautifully. We are slowly adding unique pieces and blending our love of mid-century throughout our old beauty.

On weekends you will find me out in the garden, exploring vintage stores or cooking and entertaining for family and friends here in our home. I live and breathe design and I look forward to creating more memories in our home and continuing its ongoing story. 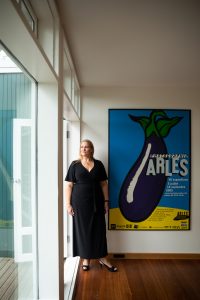 It's no surprise real estate is my chosen profession. From an early age, architecture excited me, especially older homes. Contemporary is beautiful, but mid-century modern homes tug at my heartstrings with their warmth and simplicity.

Growing up in Bayside, my dad had the hardware store in the Beaumaris Concourse for over 20 years. I came to appreciate the areas’ unique architecture and the multitude of artists and creatives who lived in and loved Beaumaris.

Joining The Agency, I had the choice to work anywhere in Melbourne. But because of its coastal beauty and appreciation for MCM - it's Beaumaris and Bayside that I choose.

My fascination with MCM saw me attend Modernism Week, Palm Springs (2019 & 2020) where I met with local agents to learn more about how they market and sell MCM homes.

The greatest pleasure I get in selling an MCM home is finding a buyer who’s just as passionate about the era as I am… A custodian that will love, restore and honour the home. 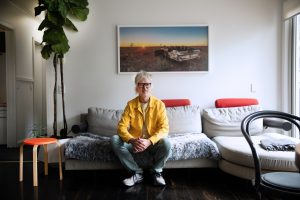 I grew up in Sandringham spending my youth riding around tee tree forests on my dragstar bike. My parents continue to have a strong connection to local community organisation and Council.

As a registered Architect since 1995, I’ve work on many home renovations, including heritage-listed properties and have a strong understanding on how qualities of space, light and material can be manipulated into a successful family home.

Modernism is the way we live today, every era thinks it is modern. What is fascinating about mid-century modern is its design aesthetic brought to life with connection to nature and simple unpretentious materials and elementary colour. It’s a first principles approach which strikes a chord today when we are looking for connection and clarity.

I enjoy participating in the Beaumaris Modern community with its passion for design, environment and community. I’m always glad to assist members with my knowledge of local planning law and construction connections. 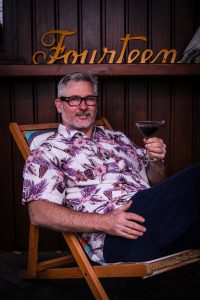 My childhood experiences in my grandparents mid-century beach shack made quite an impression on me. A shared interest in MCM furniture and collectables led Annie and I to Beaumaris in 2011 to find and renovate our own mid-century dream house.

My passion for mid-century architecture and design led on to volunteering and then working for the Robin Boyd Foundation, where my operational role involves caretaking and programming events at Robin Boyd's iconic Walsh Street house.

Beaumaris Modern has been a wonderful opportunity to build and expand a community, and to learn, love and share what we value. I'm very proud of what we've achieved so far and the journey continues. 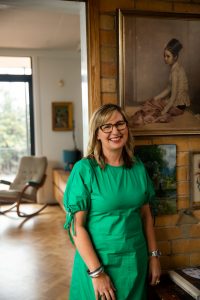 I moved to Beaumaris twenty years ago having been drawn to the area purely by the amazing bones of the home we stumbled across and purchased after just one viewing.

I didn't realise at the time we had become the next custodians of the wonderful split level Nissen House, as featured in the Beaumaris Modern book by Fiona Austin.  We lovingly restored and extended the house to create a warm and above all fun home for a growing family.

A love of all things mid-mod led me to meet Fiona through my dear friend Annie Price, join the committee from its inception and this year to become Treasurer.  It is a joy to be involved in something that has brought me new friendships, reconnected old ones, and given me a real sense of place in this gorgeous suburb. 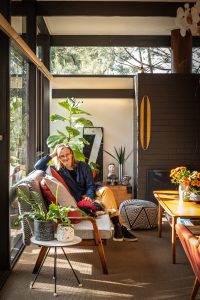 Beaumaris really is a special and unique place. The beaches, foreshore and leafy streets are stunning, but it is the mid-century architecture that drew me here nearly 20 years ago, when we purchased our 1960s house, designed by talented local architect John Baird.

Since then, we have taken our time to sympathetically restore our home and surrounding garden, and our understanding and appreciation of its clever design has only grown over the years.

The other wonderful asset that Beaumaris possesses is its residents. Beaumaris Modern is a group of like-minded people, united by their love of the great design that abounds in their suburb. I am honoured to be part of this passionate, energetic and productive group, and look forward to many more open house events, walking tours, inspiring talks, parties and more. 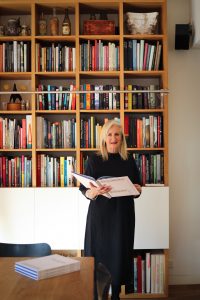 In 2001, my family moved from inner-city Melbourne to a mid-century house in Beaumaris. As designers, my partner and I were drawn to the unique Mid-Century architecture, along with the natural vegetation and coastline.

Over time, I noticed many of the houses I admired being demolished and discovered they were not protected, despite being significant. I began researching the architects, giving talks, starting an informal group and facebook page. As well as lobbying Bayside Council for a heritage study.

In 2019, we published ‘Beaumaris Modern’ the book, after years of interviewing, photographing and researching these special houses.

During my 20 years here, I’ve connected with many like-minded people who moved to Beaumaris for its homes and special character. I feel blessed to live here and committed to preserving this special place. 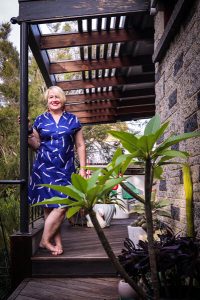 Always having a big passion for Mid Century, I moved with my family to Beaumaris in 2011 to find and renovate our beloved 1961 split level ‘Beauy Classic’.

A chance meeting with Fiona, after her son’s car broke down outside our house, led to us deciding to grow the existing Beaumaris Modern social pages into a not-for-profit community organisation to celebrate, educate and preserve the mid-century homes of Beaumaris.

Four years later, and I have learnt so much and met so many amazing creative, clever, like-minded people through my involvement with Beaumaris Modern. This has further ignited my passion for the era, the architecture, furniture and fittings. My mid-century retro collections grow and grow due to my serious garage sale and op shop addiction. And the dusting never ends. But I wouldn’t have it any other way! Our home and garden are never truly finished, they are a wonderful work in progress.